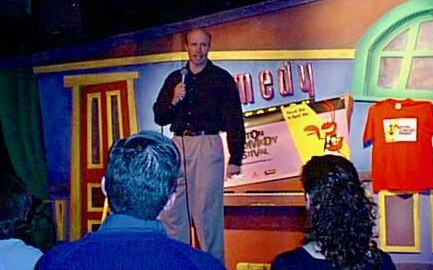 The Boston Comedy Festival aspires to be the best multi-day comedy event in New England. This four-day event is committed to bringing the New England community together through both live and filmed comedy. The festival promotes smiles, laughter, and an all-around good time through its display of comedic performance.​

Each year, the Boston Comedy Festival features hundreds of comedians from all over the world at our annual festival, but wait there's more! We produce comedy shows, workshops, and special events throughout the year as well. We have over 20 years of experience and we would love to curate a the perfect show for your theatre or upcoming event year as well​

It's good to have goals.

We have many goals in producing this annual festival:

• Expose audiences to comedy as not only as a form of joy, but also as an art form

• Bring audiences the best talent possible, and create an environment where performers can create new and exciting comedy together

• Encourage the contemporary creativity that is constantly emerging in this field and strives to educate people about the rich history ofthis genre.

• Foster a sense of community among a national network of performers; and lastly, to have a good time producing good comedic theatre.

It's all kind of a blur... but here's what we remember

The Boston Comedy and Movie Festival is the brainchild of founder Jim McCue. He starting this crazy festival journey way back in the year 2000. Jim and his sister Helen have been producing this festival with the help of many many many friends. To whom we are eternally grateful​

Jim McCue has been featured on Comedy Central, RedEye, Comcast Comedy Spotlight, NBC's "Last Comic Standing," and "Roughing It" on NESN in his native New England. Jim also founded and currently runs The Boston Comedy Festival. He works in top comedy clubs in Boston, Las Vegas, New York, Dublin, Montreal and Edinburgh. Since 1999 Jim has also entertained U.S. troops at more than 100 bases around the world. An account of his experiences performing for the troops has recently been published in Embedded Comedian which Jim describes as a "field manual for comedians in a war zone."

Helen oversees marketing and talent booking as well a the production of shows. Helen enjoys creating a supportive festival atmosphere. In addition to the annual Boston Comedy Festival Helen produces the the Best of the Boston Comedy festival in theaters all over New England, and works as a freelance visual artist.